In Fringe Time, everything exists all at once, and anything can happen. Isn’t it wonderful? (In case you can’t tell, I’m having a pretty rad few weeks). Friday was one such warped and wondrous Fringe Time evenings. In fact, Fringe Time has stretched so far that I’m writing this post nearly a month after the fact. The rest of time just got sucked up in to the Fringe Void. The wonderful, wonderful Fringe Void.

I was invited to see the spectacularly nerdy Only you Can Save Us at Tuxedo Cat. It was enormous fun. Following a crew made up of archetypal sci-fi characters – Captain Hero, to Sarge, The Girl, Doc Science and, of course, John Villaine ­– Only you Can Save Us takes us into the depths of the imagination, where heroes still exist, and the world can be saved. There were perfect dosages of tongue-in-cheek and self-awareness to balance the earnestness and cheese, but it while hinting at adult cynicism and realism, it still managed to be utterly joyful and optimistic. I had a great time! Here’s the review.

I found myself tagging along with most of the crew – Laurence Rosier Staines, Caitlin West, Michaela Savina and Pierce Wilcox (Brenden Hooke darted off  after one drink for a date) for the remainder of the night. The first unexpected show of the evening was Michael Burke’s Arena Spectacular. 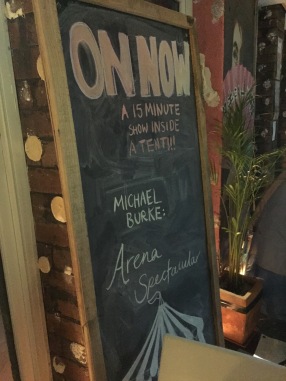 Michael Burke’s Arena Spectacular is the kind of experience that is difficult to articulate in any concise or even moderately coherent manner, because the experience itself is so strangely and wonderfully absurd. I stepped into Burke’s two man tent, nestled in the corner of Tuxedo Cat, with three other unsuspecting Fringe artists after being urged enthusiastically by a friend who refused to reveal anything about what would take place. So what can I say about Michael Burke’s Arena Spectacular? What the hell kind of experience occurs for fifteen minutes in a tent with laser beams, sound mixing, and a random assortment of toys and ornaments strewn across the crinkled canvas? Anyway, here’s the review.

From there we headed a few blocks away to the Bakehouse Theatre for Claire Lovering’s beautiful one-woman show, River. It was a beautiful story of a naive woman, an aficionado of google-poetry and aluminium crafts, who befriends an old man in the Woolworth’s cafeteria and begins an unusual but very touching friendship. As I wasn’t there in any official capacity I sat back and enjoye the show, rather than reviewing it, but I will say that it was one of my favourite performances of the festival. Lovering’s characterisation of sad and sweet River was completely compelling and very moving, as she dealt with themes of loneliness, friendship and finding your place in the world. 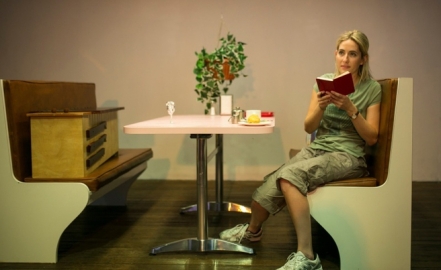 The night wasn’t over, of course, because there was still the dance-floor at the Fringe Club beckoning, but I will leave the details of the rest of the night, mostly as they’re quiet fuzzy in my memory now. Extraordinary, this Fringe Time is.